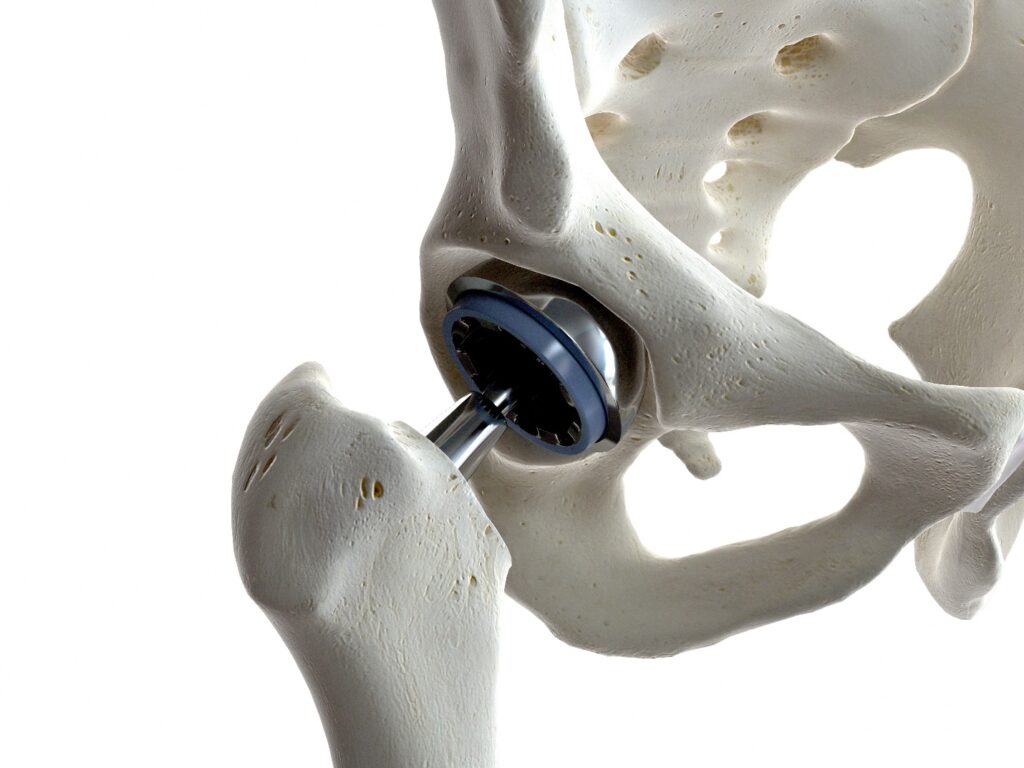 Wright Medical Group is a medical technology company that manufactures a variety of orthopedic and biologic products. In 2013, the company sold their hip and knee implant business to MicroPort Medical, focusing instead on foot and ankle products.¹ Prior to this sale, however, several models from their Profemur, Conserve, Dynasty, and Lineage lines of hip implants were alleged to have caused serious harm.

The human hip is essentially a natural ball-and-socket joint. Hip replacement devices, therefore, are made with a ball-shaped head that fits into the socket of an acetabular cup. The piece that connects this head to the rest of the implant is called the “neck,” and it is the neck and head that seem to be most vulnerable to problems.

Recipients of Wright Medical hip implants have reported problems like the following:

When these issues occur, they can cause intense pain, discomfort, and serious illness. Typically, patients require emergency revision surgery to correct the problem and prevent any further damage.

In 2009, Wright Medical redesigned Profemur implants with a more resilient neck made from cobalt-chromium. However, they did not inform prior recipients of the risks related to the original design. This meant that although the manufacturer clearly recognized the need to change materials, many patients and surgeons were left unaware that older device models had a high failure risk.

These problems are not just patient claims; they are backed by clinical research. In a 2015 study published in the journal Clinical Orthopaedics and Related Research, the authors called the failure rates for the Profemur Z and Profemur E devices “unacceptably high.”³ A 2009 report by the Australian Orthopaedic Association showed that the Wright Profemur Z femoral stem had a high failure rate, requiring approximately 11.2 percent of all patients receiving the implant to need revision surgery.

Was There a Wright Medical Hip Replacement Recall?

When a company learns that a product they produce poses a risk of harm to consumers, they are legally obligated to inform consumers and prevent further harm. In the case of their Profemur devices, it would have been appropriate for Wright Medical to issue a warning about the fracture risk, introduce the new design, and issue a Wright hip replacement recall to remove the faulty devices from the market. However, they did not do so.

Though it’s possible Wright may have decided to switch the neck materials for reasons unrelated to fracture risk, the timeline of events strongly suggests that they were aware of the problems, made design changes to address them, but failed to admit fault or take appropriate action to protect patients.

In 2015, just two years after Wright had sold their hip implant business to MicroPort, the new owners recalled nearly 11,000 Profemur devices. In the recall, they warned that fracture would require emergency surgery and could even have fatal repercussions. The FDA named it a Class I recall (the most serious).⁴

The following are examples of hip implant lawsuits against Wright Medical, as well as any settlements or damages paid.

I Have a Wright Hip Implant. What Should I Do?

If you have a Wright Medical hip implant device and have experienced symptoms like pain, illness, instability, or outright failure, you may have grounds for legal action. Even if you have not experienced any negative symptoms, you may want to confirm the model of implant you received and look into whether any problems have been reported.

Those who received a Profemur implant before or around 2009 may have received one made with a titanium neck instead of the improved cobalt-chromium neck. If you have one of these older Profemur models and have experienced pain, joint weakness, or hip failure, you may have a case for a lawsuit. Again, you may want to confirm the model of the implant you received with your surgeon’s office.

You’ll also want to get in touch with an experienced hip replacement lawyer who can evaluate your situation, determine whether you have a good case and guide you through the process of taking legal action.

If You Think You Have a Case for a Wright Medical Hip Replacement Lawsuit, We Can Help

At Saunders & Walker P.A., our experienced harmful product attorneys have helped clients with failed hip implants and other personal injury issues get the justice and compensation they deserve. In a free initial consultation, we’ll determine whether you have a good case for court. If you do, we’ll take you step-by-step through the process, gathering information, filing paperwork for you, and building a strong, successful case.

For those who have suffered sudden hip device failure, financial pressures like emergency room bills and revision surgery costs can make it harder to take legal action. At Saunders & Walker P.A., we eliminate this financial hurdle with our contingency policy. If there is no Wright Medical hip settlement and we can’t recover any damages for you, you won’t have to pay us a dime.

If you or a loved one have also experienced injury, pain, or other problems with a defective hip device, please contact us online or call (727) 579-4500 for more information and attorney review of your case.