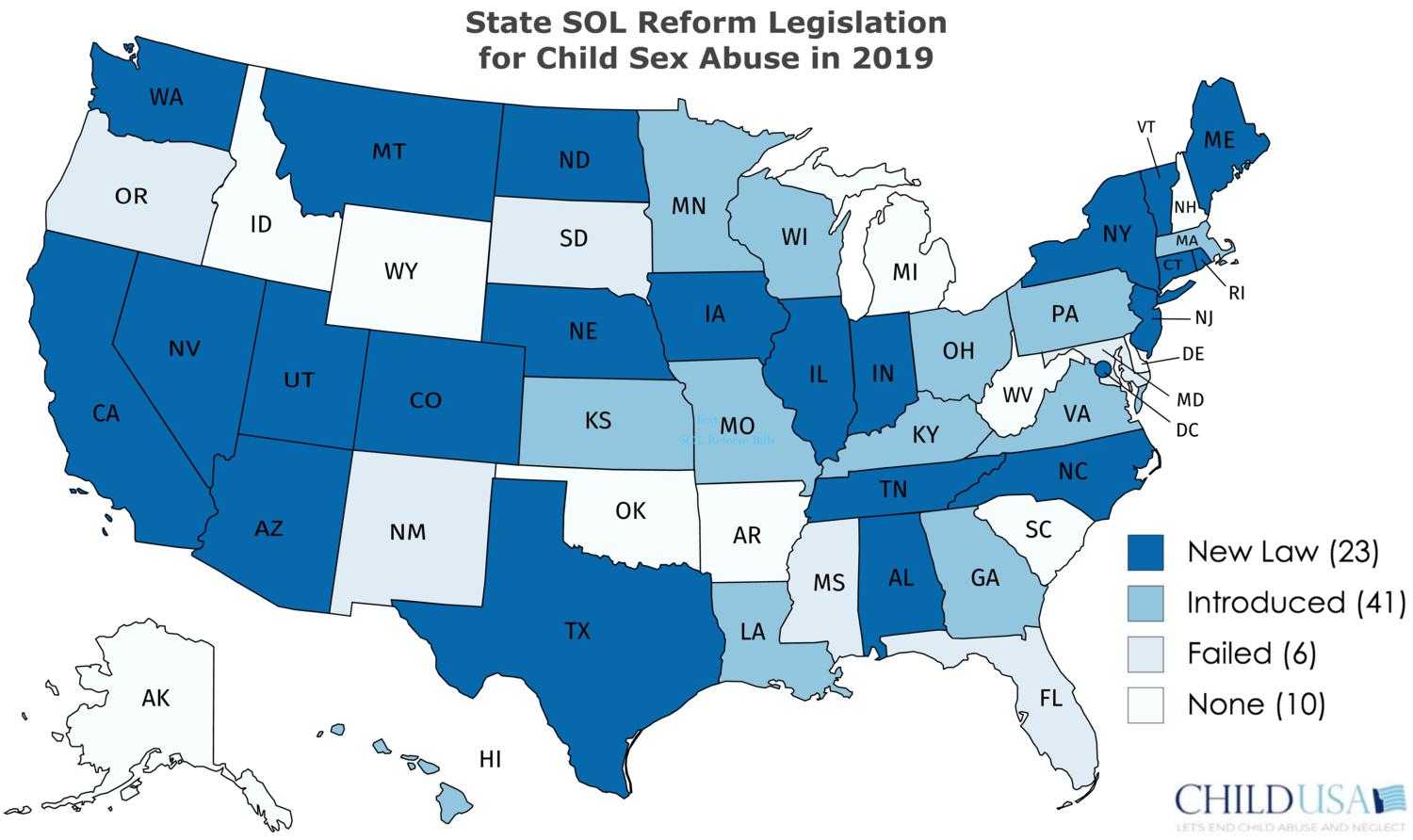 This is a historic year for child sex abuse victims. Millions have been empowered by statute of limitations, or SOL, reform in the United States.

Never before have we seen this many states step up. In recent years about a dozen states would consider such legal change and less than a handful would pass something. Those numbers are dramatically higher in 2019. Forty states and the District of Columbia introduced SOL legislation and over half, 23 states, and D.C. have passed progressive reforms for the victims. In 2019, 18 states have extended or eliminated the criminal SOL; 14 states have extended or eliminated the civil SOL; and 9 states have revived civil SOLs. For even more details of this historic year, check out the 2019 SOL Report Summary.

What is SOL reform?

It hands victims power and society the truth. It puts perpetrators in jail. It forces the ones who endangered children to release their confidential files to the public. It warns institutions that they must change or suffer consequences. There is no good reason not to pass SOL reform.

The #MeToo movement invited every victim to come forward. The SOL Reform movement says to every victim—it’s not fair of us to ask you to tell your story and then ignore how our laws kept you silent. You deserve more than a microphone—you have a right to power against those who hurt you. This is a revolution that is reorganizing dangerous power structures.

I would posit it is the trifecta of 2018: First, over 200 brave survivors read their victim impact statements against their abuser, Larry Nassar, and the media gave these historic proceedings the attention they deserved. Second, there was Pennsylvania Attorney General Josh Shapiro’s grand jury report into six Catholic dioceses, which made Pennsylvania the first state to complete grand jury investigations into every diocese. Shapiro’s report reinforced the message of the previous grand jury reports in Philadelphia and Johnstown: bishops treated children and the victims as collateral damage to their own personal dramas. The world responded with disgust and impatience with the Church’s foot-dragging. Third, investigative reporter Julie Brown and the Miami Herald released their groundbreaking “Perversion of Justice” report on Jeffrey Epstein’s international child sex-trafficking operation, which showed the corruption of federal prosecutors serving a powerful and well-connected man and the willful blindness of employees, friends, and guests in the upper crust of society to the exploitation of girls. By the end of 2018, most of us including lawmakers had simply had enough and it was time to do something.

Of course, 2018 built on the years of work by the likes of Barbara Blaine and David Clohessy of SNAP (the Survivors Network of those Abused by Priests), my team at Cardozo Law School and now at Penn and CHILD USA, and dozens of other organizations in each state, along with thousands of brave victims fighting through the trauma to get lawmakers to do the right thing.

This movement was kicked off by the 2002 Boston Globe Spotlight report that disclosed the cover up in the Boston Archdiocese. What each state has done since 2002 is described here in CHILD USA’s 2019 Report on SOL reform since 2002.

What is left to do?

As the 2019 SOL Report explains, states like New York, New Jersey, California, and North Carolina took major strides this year, but there are states that are falling farther and farther behind the curve.

Pennsylvania is now one of the worst in the country in both criminal and civil categories despite the fact that SOL reform was proposed as long ago as 2005 in the 2005 Philadelphia Grand Jury Report and no state has studied the problem more than Pennsylvania.

Pennsylvania also has the distinction of introducing the worst reform bill in the United States this year when a bill was introduced and passed in the Assembly that requires victims to obtain a constitutional amendment as a pre-condition to obtaining window legislation; in other words, they were being asked to advocate for 3-4 more years while the institutions responsible for their abuse had even more time to move assets and shred files. The Pennsylvania Senate will take up the measure today.

It’s high time that Pennsylvania follow the irrefutable logic of SOL reform and give the public the window legislation it needs now.

Other states where there is a ray of hope and that need to empower the victims and stop shielding abusers and their enablers include Colorado, Connecticut, Florida, Indiana, Iowa, Massachusetts, Michigan, Ohio, and Rhode Island. In the end, every state has a moral obligation to lift up the victims, because it was the state’s legal and social systems that created the conditions for the abuse and the coverups.

We are in the midst of a civil rights movement for children. The reality is that children will not thrive in a society where individuals and institutions can ignore child sex abuse without consequence. It’s time to focus on the facts and do what is right.

About Marci A. Hamilton

Marci A. Hamilton is the Robert A. Fox Leadership Program Professor of Practice, and Fox Family Pavilion Resident Senior Fellow in the Program for Research on Religion at the University of Pennsylvania; the founder, CEO, and Academic Director of the nonprofit think tank to prevent child abuse and neglect, CHILD USA, and author of God vs. the Gavel: The Perils of Extreme Religious Liberty and Justice Denied: What America Must Do to Protect Its Children. Her email address is marcih@sas.upenn.edu.