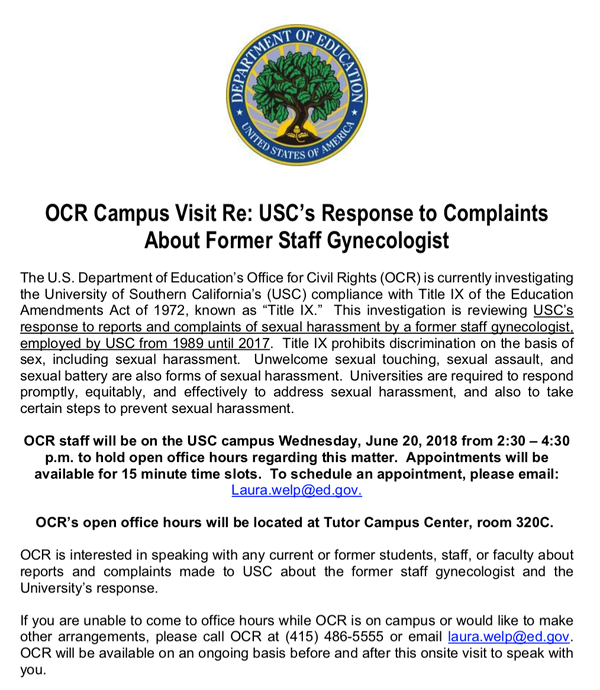 The Feds are coming to the University of Southern California.  USC students who encountered former campus gynecologist Dr. George Tyndall can meet with a representative from the U.S. Department of Education Office for Civil Rights on Wednesday, June 20.

Tyndall was the sole gynecologist on the USC campus for two decades and has been at the center of a sexual abuse controversy roiling the campus ever since an LA Times investigation revealed that he allegedly sexually abused female students under the guise of performing gynecological exams.

The pressure is mounting against Tyndall and the USC administration.  Three alleged victims of former USC gynecologist Dr. George Tyndall testified at a state Senate hearing in Sacramento on Monday, June 18.

According to KNX1070, one woman emotionally claimed in front of the state of California panel looking into the sexual misconduct complaints that Tyndall, in the fall of 2012, “told me that I was beautiful, complimented my vagina, told me that my boyfriend must enjoy having sex with me. He penetrated me. He groped my breasts all while claiming there was a medical reason for everything he was doing.”

The woman contended that many of Dr. Tyndall’s young patients at the University of Southern California were Asian and he “exploited the conservative Asian culture knowing that many of the women he abused were unable to speak out loud or describe their own bodies, much less what happened in that exam room.”

If you or a loved one have been abused by Dr. George Tyndall, please contact Attorney Joe Saunders.  Saunders is a member of the California Bar and has been representing sexual abuse survivors for decades.